Since this issue is of utmost importance, particularly to younger blood recruited after 01.01.2004 and they are in quite anguish, we hope, the staff covered under NPS must be given some relief, and as has been discussed many a times, the Government of India must provide Guaranteed Pension/Family Pension Scheme where at least they should be able to draw 50% of their wages at the last pay drawn.

It has been observed that in all the countries where such scheme is in prevalent, the government is paying much more contribution, and in case of any market failure the same is covered by different government Social Security Schemes. The demand of the NC/JCM has always been to restore the “Defined Pension/Family Pension Scheme”.

We hope that, the government will consider the demand of the NC/JCM (Staff Side) and relief will be given to the staff covered under NPS.
Sincerely yours, Sd/- (Shiva Gopal Mishra) Secretary (Staff Side) National Council (JCM) 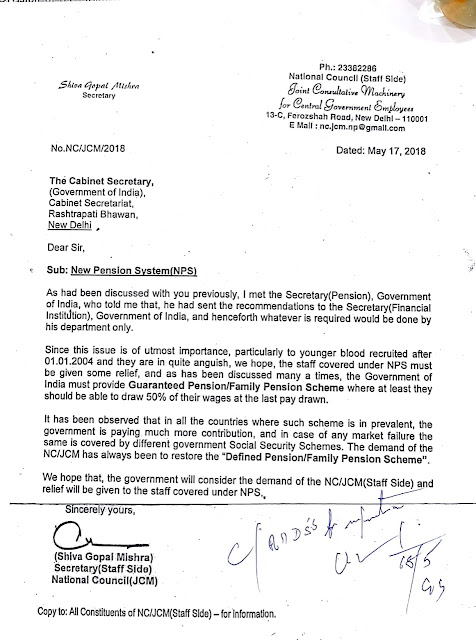