Kindly refer to Para No. 8.1 of the Minutes of the Meeting of the 6th CPC National Anomaly Committee held on 17th July, 2012. This is with regard to Item No. 1, 2, 3 and 4 i.e. fixation of pay in revised Pay Scale. The Staff Side in the meeting has reiterated their demand that the pay in the incumbents holding the merged Pay Scale of Rs.5000-8000 and Rs.5500-9000 should, have been fixed by applying the multiplication factor of 1.86 at Rs.6500 w.e.f. 01.01.2006 implying thereby that the commencement point of the Pay Band-2 should be at Rs.12090/-based on 6500 x 1.86 = 12090 instead of Rs.9300/- computed by multiplying Rs.5000 x 1.86. The Official Side has rejected the demand of the Staff Side and after discussion it was decided that on this issue a disagreement may have to be recorded for referring the some to arbitration. Even though it is more than 5 years after the above decision we are not aware that what action has been taken to implement the decision taken in the National Anomaly Committee Meeting.

In this situation the affected Central Government Employees working in different Ministries have approached Court of Law for getting justice. Recently the CAT Ernakulum Bench in its Order OA No.180/00569/2014 delivered on 03rd of April, 2018 has upheld the demand of the Staff Side and has given the following direction to the Government of India. The relevant portion of the Judgment is given below for your kind information.

14. It has to be borne in mind that CDS (RP) Rules, 2008 is a Rule notified under the proviso to Article 309 of the Constitution of India made by the President and hence it has a statutory status in the eye of law. Therefore, any interpretation of the provisions in the said Rules has to be in terms of the Rules itself Any O.M. issued by way of clarification, explanation or prescribing the modalities for fixation of initial pay of the Government Employees as per the revised pay structure can be only in terms of what is stated in the Rules.

15. As observed above, going by the definitions of the terms ‘existing basic pay’ and ‘existing scale’ in the CDS (RP) Rules, 2008, Rule 7 fixation can be only in accordance with the afore-mentioned definitions of ‘existing basic pay’ and ‘existing scale’ only and not by way of administrative O.Ms and instructions contained in Annexure A-1 and Annexure-A-2 communications. Therefore, we are inclined to quash and set aside Annexure A-1 and Annexure A-2 communications. We do so. We hold that the applicants are entitled to the declaration as prayed for and that the respondents should be directed to fix the initial pay of the applicants including all the members of Applicant No. 1 association in the revised pay structure by fixing their salary in the revised pay scale of Rs. 6500-10500 treating Rs. 6500/- as the existing basic pay us on 01.01.2006 with all consequential benefits. We order accordingly. This order shall be complied within 3 months from the date of receipt of copy of this order."
In view of the above Judgment it is requested that without further prolonging the matter the above Judgment may be implemented by issuing a general instructions extending the benefit to all the similarly placed Employees.

Awaiting for your favourable response please. Thanking you,
Yours Faithfully, 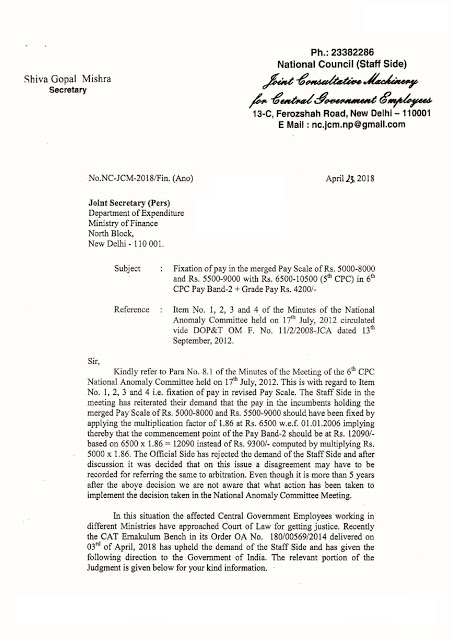 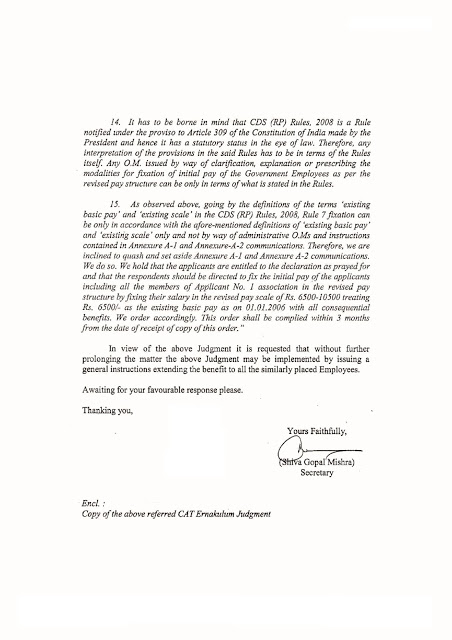