DOT- Decentralization of payment of pensionary benefits in respect of Heads of BSNL Circles, BBNL, RLO and TERM Cell at respective CCA Offices

(a) In DoT HQ PFP section, as in the other Ministries will handle authorization / payment of only the pension cases of employees of the Ministry. The processing of pension cases of Heads of BSNL Circles/BBNL/RLO/TERM Cells will continue to be done by the respective administrative wing / STP wing of DoT HQ.

(b) The processed pension cases of Heads of BSNL Circles/BBNL/RLO/TERM Cells will be sent by the STP wing to PFP wing who in turn shall co-ordinate with respective CCAs for further authorization and release of sanctions for payment of pensionary benefits. Similarly, any observations by the CCAs will be sent to PFP wing who will co-ordinate with STP wing. The PFP section in DoT HQ will act as a bridge between STP wing and concerned CCAs for movement of pension files/ related compliances till further review.

(c) In CCAs offices these cases will be dealt as per the provisions of CCS (Pension) Rules 1972 for authorization / payment and release of PPOs.

(d) The payment of Leave Encashment /CGEGIS will continue to be made at respective CCAs based on the sanction received from respective administration section of DoT..

The above decentralized procedure is ordered to be implemented from the month of April 2018 (Retirements taking on 30-04-2018 and onwards). 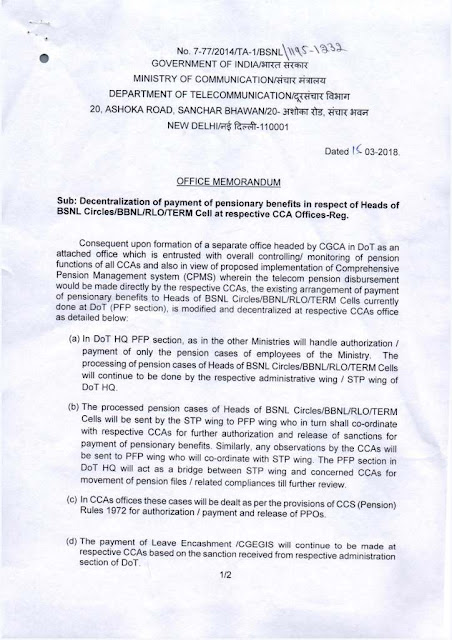 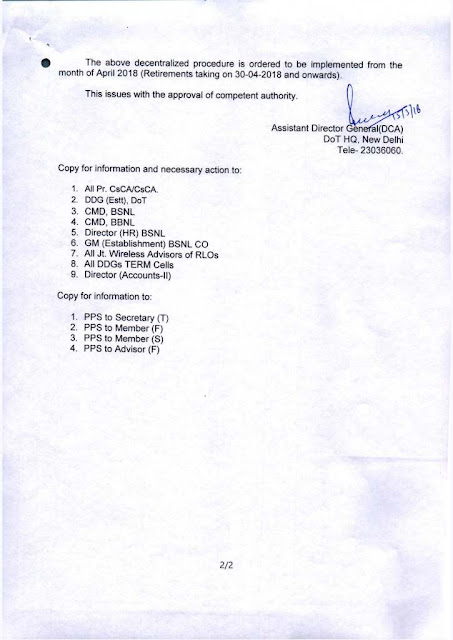