Instructions for the purchase of laptops, notebooks and similar devices for eligible officers revised guidelines
F. No. 08(34)/2017-E.II(A)
Ministry of Finance
Department of Expenditure
E.II(A) Branch
New Delhi, the 20th February, 2018
OFFICE MEMORANDUM
Subject: Instructions for the purchase of laptops/notebooks and similar devices for eligible officers — revised guidelines.
In supersession to this Ministry's Office Memorandum bearing No. 08(64)/2017-E.II(A) dated 27th September 2016, regarding purchase of Note Book/Lap-Top computers by Ministries/ Departments & delegation of powers thereof, it has been decided that lap-top; tablet; notepad; ultra-book; notebook, net-book or devices of similar categories may be issued to officers of the rank of Deputy Secretary and above for discharge of official work. These powers shall continue to be exercised in consultation with the Financial Adviser by the Secretary of the Ministry/ Department or any other authority who are specifically delegated these powers by this Ministry from time to time, duly taking into consideration the functional requirements and budgetary provisions.

2. This would, however, be subject to the following conditions:

Standard Software: Any software (Operating System, Antivirus software or MS-Office etc.) that is essential for the running of device towards discharge of official functions/duties.

(ii) Purchase Procedures: As prescribed under GFRs/CVC guidelines may be followed.

(iii) Safety, Security & Maintenance of Device: The officer, who is given the device, shall be personally responsible for its safety and security as well as security of data/information, though the device shall continue to remain Government property. The officer concerned will be at liberty to get the device insured at his personal cost.

a) No new device may be sanctioned to an officer, who has already been allotted a device. in a Ministry /Department, up to five years. Any further issue of laptop in case of loss/damage beyond repairs within the prescribed period, should be considered only after the cost is recovered from the officer based on the book value after deducting the depreciation.

b) For the purpose of calculation of the book value, a depreciation of 25% per year, on straight line method, be adopted.

c) Post the completion of five years of usage, the officer shall retain the issued device.

(v) Conditions at the time of transfer, Superannuation etc.:

b) Upon transfer/deputation of the officer to other Ministry/ Department/Attached/Sub-ordinate offices of the Government of India or to the State Government in case of Officers of the All India Services, the officer will have the option of retaining the existing device and in case of such retention, this fact should be specifically mentioned in the Last Pay Certificate (LPC).

(i) For the officials who are currently holding laptops, notebooks or similar devices in accordance with the provisions of O.M. dt. 27/09/2016, the terms & conditions for retention/disposal of the device shall continue to be governed under the existing instructions of the said O.M.

(ii) The applicability of the provisions of this order to the officers of Armed Forces/Para-Military Forces, officers of MoD & other similar establishments would be subject to restrictions imposed by the concerned departments/organizations duly taking into consideration the security of information. In all such cases the security of the information shall be the responsibility of the concerned department.

4. This is issued with the approval of Secretary (Expenditure).
Sd/-
(Dr. Bhartendu Kumar Singh)
Director(E.IIA) 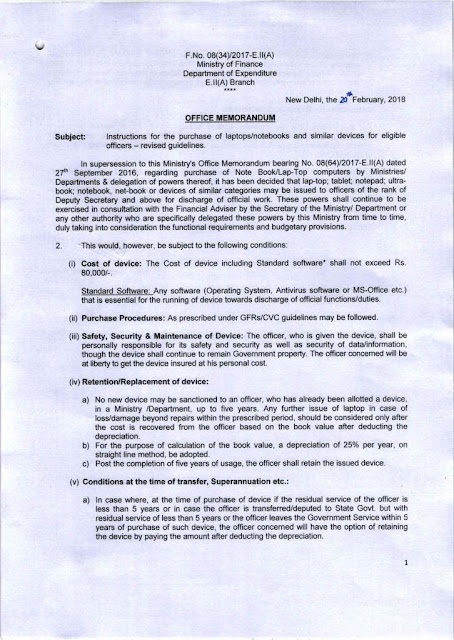 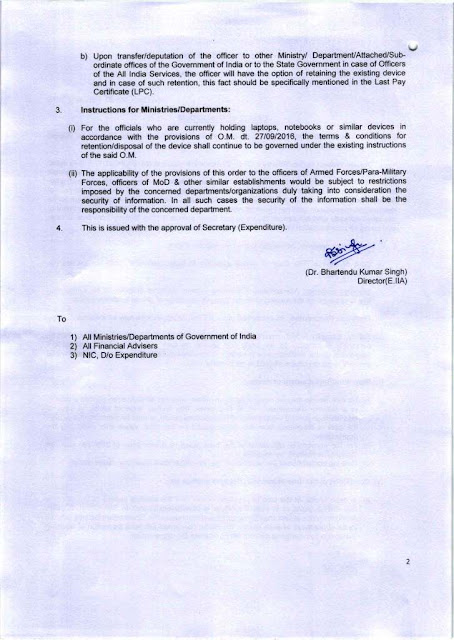