The undersigned is directed to refer to this Department's O.M.of even no. dated 19.09.2017 on the subject noted above, which inter-alia provides that the travel entitlements of Government servants for the purpose of LTC shall be the same as TA entitlements as notified vide Ministry of Finance's O.M. dated 13.07.2017, except the air travel entitlement for Level 6 to Level 8 of the Pay Matrix, which is allowed in respect of TA only and not for LTC.

2. In this regard, this Department is in receipt of references from Government employees and various Departments seeking clarification as to whether travel by Business class for the purpose of LTC, shall be allowed to the Government employees as per their TA entitlements, or the earlier instructions regarding air travel by Economy class only as provided in Department of Expenditure's O.M. No. 19024/1/2009-E.IV dated 16.09.2010 shall continue to exist.

3. The matter has been examined in consultation with Department of Expenditure and it is hereby clarified that in line with DoPT's instructions dated 19.09.2017, the Government employees in the bracket of pay level 14 and above, shall be entitled for air travel in Business/Club class for the purpose of LTC. However, other conditions like rate ceiling of LTC80 fare and booking of tickets through authorised modes, shall continue to exist.

Sd/-
(Surya Narayan Jha)
Under Secretary to the Government of India 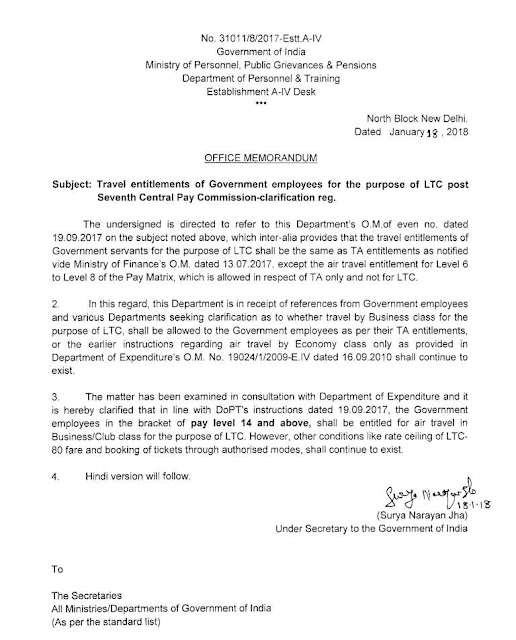