2. Railways, being Principal Employer are required to ensure that the contractors are complying with the provisions of the Contract Labour (R&A) Act, 1970 and Minimum wages Act, 1948 strictly and arranging prescribed minimum wages to the contract labourers.

3. This issues with the concurrence of the Finance Directorate of Ministry of Railways.
Please acknowledge receipt.
Sd/-
(Manju)
Jt. Director Establishment (LL) 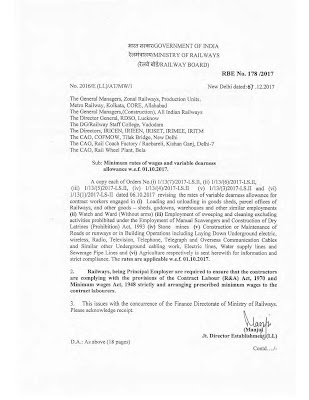