I am directed to say that consequent upon the acceptance of the recommendation of the Seventh Central Pay Commission and in supersession of the all existing orders issued on the subject from time to time, the President is pleased to decide that the Camp Allowance and TA Bounty applicable for Territorial Army shall be merged into a single allowanced to be called Territorial Army Allowance and will be payable at the following rates:

2. These rates shall automatically increase by 25%, each time the Dearness Allowance rises by 50%. 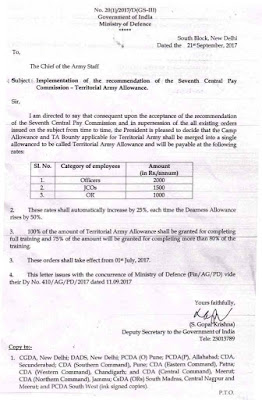