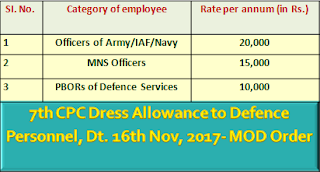 
Subject: Implementation of the recommendation of the Seventh Central Pay Commission - Dress Allowance.


I am directed to refer to MoD letter Nos. 1(54)/2008/D(Pay/Services) and 1(55)/2008/D(Pay/Services) both dated 04.11.2008 and Department of Expenditure OM No. 19051/1/2017-E.IV dated 02.08.2017 and to say that consequent upon the decision taken by the Government on the recommendations of the Seventh Central Pay Commission vide Ministry of Finance Resolution No. 11-1/2016-IC, in supersession of the existing orders relating to Uniform related Allowances viz. Uniform Allowance, Initial Equipment Allowance, Kit Maintenance Allowance and Washing Allowance which have been subsumed in a single Dress Allowance, the President is pleased to decide the rates of Dress Allowance in respect of the following categories of Armed Forces personnel as under:-

2. Allowances related to maintenance, washing of Uniform are subsumed in Dress Allowance and will not be payable separately.

3. Further categories of staff who were earlier being provided Uniforms, will henceforth not be provided with Uniforms.

4. The amount of Dress Allowance shall be credited to the salary of employees directly once a year in the month of July.

5. This allowance covers only the basic uniform of the employees. Any special clothing like that provided at Siachen Glacier or inside submarine will continue to be provided as per existing norms.

6. The other terms and conditions would continue to be applicable along with their admissibility (unless otherwise stated) as mentioned in MoD letters dated 04.11.2008 and otherwise.

Sd/-
(Jayant Sinha)
Joint Secretary to the Govt. of India 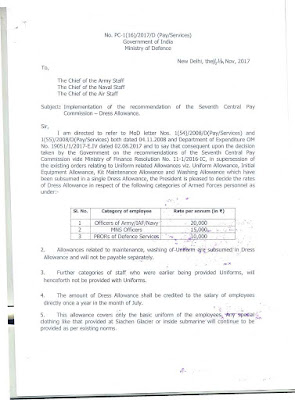 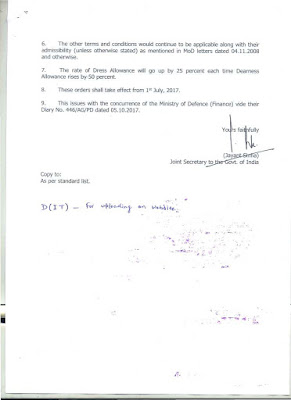