There are various reports in the news media, print media & social media regarding the hike in the minimum wage of Central Government employees from the existing Rs 18,000/ - to Rs 21,000/ and fitment formula from 2.57 to 3.00, which shall be implemented from 1st January 2018. The same shall be announced in the National Anomaly Committee due on 9th of October.

Comrades , We cannot confirm this news, comrades we should concentrate on struggle path as the Confederation has given the series of programs , I hope the Government will implement the hike in minimum wage for CG employees and revise the fitment formula also from the existing 2.57 to 3.00 even though the Staff side JCM has demanded Rs 26,000/ as minimum wage and fitment formula of 3.56 , this hike should be from 1/1/2016 not 1/1/2018 as per media reports.

Secondly the economy of the country which was going very well during past three years has showed down ward trend in last one year as the GDP which was at 9.1 in 2015-16 has reduced to 5.7 in 2017-18 .The economic activity has to take place, it is also observed during the past one year, in spite of economic recessions, the Government revenue collection has increased considerably. To improve the economic activity of the country and increase the GDP the Central Government should spend its funds which is available with them .

If the Central Government increases the minimum wage and fitment formula for its employees, the Central Government employees gets back 40% of the wage increase through the Income Tax and GST . So hardly a Government servant is left out with 60% wage hike , here also he spends the amount credited to him , as such an economic activity is induced in the public which will help to create more demand and employment activity.

I hope the Central Government takes a political decisions on increase of minimum wage hike and fitment formula for more than one crore employees which will also benefit the public and the CG employees. 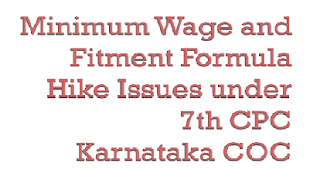