NFIR requests to kindly appreciate that the Railways working is unique, peculiar and totally different, while the average Railway employee performs his/her duties at different work places (example:- Track Maintainers, Technicians, Pointsmen, Loco Running & Traffic Staff etc.,) in shift duties and after completion of their duty hours, they leave the work spot and again come back to duty as per the duty rosters/links or duty lists, as the case may be. How the 'Good' or 'Very Good' benchmark can be measured in these work situations.

The decision, upgrading the benchmark from 'Good' to 'Very Good' gives handle to higher level authorities to victimize those in lower pay levels. Most of the Railway employees are the field workers who perform assigned duties and leave the work places. In view of these peculiarities in the working system in Railways, applying 'Very Good' benchmark for considering financial upgradation under MACPS or for promotion is an unjustified step which needs to be taken up by the Railway Ministry with DoP&T seeking independence to the Railway Board to take a view according to Railways' conditions. I met your predecessor as well the Member Staff (recently retired) and explained the necessity to approach DoP&T for mitigating the problem so far as Railway employees are concerned.

I therefore, request your kind intervention to consider the merits/points brought out through my letters (copies enclosed) and see that the genuine interests of Railway employees are safeguarded and no scope is given to deprive them the MACP benefit on the pretext of not rated "Very Good”. 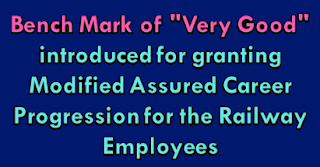