Simplification of Procedure for Inter-Railway Mutual Transfer- RBE No. 131/2017


GOVERNMENT OF INDIA
MINISTRY OF RAILWAYS
( RAILWAY BOARD)

The General Managers
All Zonal Railways & Production Units
(As per standard list).


In continuation of this office letter of even number dated 15.09.2017( R.B.E. No.130/2017), the procedure for Mutual Transfer is further simplified. Hereafter, for Divisionally controlled posts, applications for Mutual Transfer duly signed by both applicants in proper format, from a Division of one Railway to Division on another Railway need not routed through the HQ offices. It shall be dealt directly only by the Divisions concerned. For HQ controlled posts, the prevailinq procedure shall continue.

3. As the mutual transfers are ordered with the consent of both the employees, it should be made clear right at the time of forwarding applications that no request for backtracking from the mutual exchange arrangement will be entertained under any circumstances (Board’s letter No.E(NG)I-2006/TR/6 dated 21.04.2006 refers).

5. All other terms and conditions regulating mutual transfer of Railway employees will continue to remain in force. 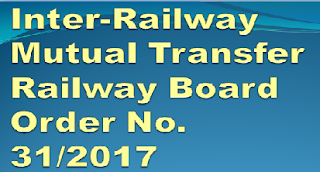 Simplification of Procedure for Inter- Railway Mutual Transfer- Railway Board