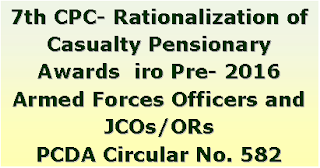 Subject: Implementation of Government decision on the recommendations of the 7th Central Pay Commission (CPC)- Rationalization of Casualty Pensionary Awards in respect of Armed Forces Officers and JCOs/ ORs retired/ discharged/ died/ invalided out from service prior to 01.01.2016.


Copy of GOI, MoD letter No. 17(01)/2017(01)/D(Pension/Policy) dated 4th September 2017 on the above subject, which is self-explanatory, is forwarded herewith for further necessary action at your end.

8. This circular has been uploaded on this office website www.pcdapension.nic.in for dissemination to all alongwith Defence pensioners and Pension Disbursing Agencies.