Pay anomaly in the Supervisory Cadre of Accounts Department, Ministry of Railways and pay disparity with other Supervisory cadres of the Central Government services


Sub: Pay anomaly in the Supervisory Cadre of Accounts Department, Ministry of Railways and pay disparity with other Supervisory cadres of the Central Government services.

The All India Railway Accounts staff Association while deposing before the 7th CPC had brought to the notice of the Commission that subsequent to the acceptance of the VI CPC recommendations a peculiar anomaly arose where a junior drawing higher Grade Pay than the Senior in the cadre of Section Officer (Accounts). The Committee of the 7th Pay Commission observed that the above anomalous situation purely arose on circumstantial grounds and needs to be rectified. Thus in its report, the Commission found merit in the above contention and recommended that Seniors must be given the benefit of stepping up and further in line with their recommendations for organized Accounts cadres, it further recommended that Section Officer (Accounts) Railways in GP Rs. 4800 should be upgraded on completion of four years service, to the existing GP5400 (PB-2) viz., level 9 in the Pay Matrix, on non functional basis. ( Ref: Para No 11.40.83 of 7th CPC).

The 7th Central Pay Commission acknowledged that the skill sets of the Organized Accounts cadres are fairly higher and the Organized Accounts Cadre have to compulsorily pass various stringent examinations for promotions. Moreover, Sr. Section Officer ( Accounts) had been assigned complete parity with Section Officers (SO) of the Central Secretariat Service (CSS) and they had been granted the pay scale of Rs.6500-10500 (S-12) w.e.f.01-01-1996 in accordance with 6th CPC. Further, it was also noticed that parity between Organized Accounts and the cadre of Section Officers of CSS was disturbed by granting non functional up gradation to GP Rs. 5400 (PB-3) after four years of service to Section Officers of CSS only. The Commission also noted that , non-functional upgradation from GP Rs. 4800 to GP. Rs. 5400 (PB-3) on completion of four years of service, has been accorded to a number of posts by the Govt. of India in 2008. The Commission also found no reason and justification to deprive the benefit of up gradation to GP Rs. 5400 to the officers of the Organized Accounts Cadres who are in GP RS. 4800.

`Thus, the Pay Commission recommended that, all officers in the Organized Accounts Cadres ( in the Indian Audit and Accounts Department, Defence Accounts Department, Indian Civil Accounts Organization, Railways, Posts and Telecommunications) who are in GP Rs. 4800, should be upgraded on completion of four years of service to GP 5400 (PB-2) viz. pay level 9 in the Pay matrix` ( Para 11.12.140 of 7th CPC.)

To utter dismay, the Government of India while accepting the recommendations of the Pay Commission on up-gradation of posts, left out the Ministry of Railways and Defense for non functional up-gradation GP 5400(PB-3) after four years of service for the categories of AAOs (Finance Division of Defense, Ministry of Defense) and Senior Section Officer (Accounts) Senior Traveling Inspector of Accounts and Senior Inspector of Stores Accounts, Ministry of Railways with the remarks that it will be examined by DOPT for taking a comprehensive view in the matter`. The DOPT took almost nine months and transferred the issue on 7th April 2017 to the Ministry of Finance(Expenditure). In other words benefit of Up gradation to GP 5400 after completion of four years of service has been granted to all other Organized Accounts Cadres of the Indian Audit and Accounts Department, Indian Civil Accounts Organization and Posts and Telecommunication.

The Ministry of Defense in their recent ID Note No 369/C/2017 dated 23-3-2017 also recommended that `above benefit be extended to the Assistant Accounts Officer (AAO) of Defense Accounts Department`, `On the other hand, DOPT in their communication ID note No.1198678 /16- Est (Pay-1) dated 2-2-2017 to the Executive Director Pay Commission 111, Ministry of Railways, advised the Ministry of Railways to consult Department of Expenditure in terms of Government of India (Allocation of Business Rules). It shows the indifferent approach of Government towards Railway Accounts Employee.

The Supervisory Cadre of the Accounts Department of the Railways is also entrusted with the responsibilities of presenting the Railway Accounts on widely accepted accrual based Accounting in addition to presenting the Government accounts as per requirements laid down in the Constitution of India , as announced by Hon`ble Minister of Railways, Shri Suresh Prabhu, in his budget speech.

It would be highly appreciated, if the benefit of grant of GP Rs. 5400 is extended to Supervisory Cadre of the Accounts Department, Ministry of Railways on completion of four years of service in GP Rs. 4800 who are the only left in this case. This will also end pay parity between the organised accounts cadres of the Government of India.

An early action in the matter shall be highly appreciated. 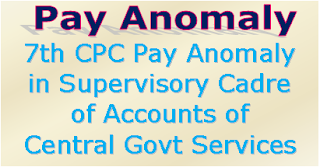