Brief of the meeting of the Standing Committee of National Council (JCM) held today with the Additional Secretary, Department of Expenditure

All Constituents of
National Council JCM(Staff Side),

Dear Comrades!
Sub: Brief of the meeting of the Standing Committee of National Council (JCM) held today with the Additional Secretary, Department of Expenditure

A meeting of the Standing Committee of National Council(JCM) with the Additional Secretary, Department of Expenditure, has taken place today to discuss about the issues arising after the implementation of the 7th CPC recommendations.

At the beginning of the meeting; the Official Side briefed about the decisions taken by the Government on the Allowances. The Staff Side thereafter raised the following issues:-

1. The Central Government Employees are dissatisfied by the decision taken by the Government not to revise the HRA percentage recommended by 7th CPC. The demand of the Staff Side is reiterated for retaining the existing percentage of 30%, 20% and 10%.

2. The low paid employees who were getting Transport Allowance @ Rs.3600 + DA as on 1.1.2016 is subjected to huge financial loss since their Transport Allowances has been reduced to Rs.1300+DA. This injustice should be rectified. Official Side agreed for a review.

3. Even though the demand of the Staff Side is that, Allowances should also be revised from the date of revision of pay i.e. 01.01.2016, at least Government should have given the same from the date of notification of 7th CPC as was done during the previous pay Commissions. The Official Side is requested to consider this demand. The Staff Side also drawn attention of the Official Side towards the Awards given by the Board of Arbitration in favour of the employees in the past in this regard.

4. As regards Minimum Pay and Fitment Formula, the Staff Side has already submitted the justification for increasing Minimum Pay and Fitment Factor. However, the Official Side has not yet responded till date on this demand. Since Minimum Pay is not derived on the basis of Dr. Akryod Formula/15th ILC norms and Supreme Court judgments, the issue requires the review by the Government. Moreover, even in the existing Pay Matrix there is discrimination between the low paid employees and high paid officers. Therefore, this demand should be discussed with the Staff Side by the Official Side so as to settle this major issue which was agreed to be considered by the Group of Ministers.

5. Government may restore various advances withdrawn and should also issue orders for revision of HBA as recommended by 7th CPC and accepted by the Cabinet.

6. While thanking the government for restoring Risk Allowances to the Defence Civilian Employees, the revised rate is very negligible. It should be at least at par with the Risk Matrix given to the Fire Fighting Staff

7. Staff Side, while thanking the government for restoration of some of the allowances, abolished/subsumed by the 7th CPC, asked the Finance Ministry to remove the barrier of coming back to Finance Ministry in case of 12 allowances meant for the Running Staff of the Indian Railways, being bilateral settlement with the Railway Ministry.

The Staff Side informed the Chairman that, considering the discontentment prevailing amongst the Central Government Employees, the Official Side may convey the feelings of the Staff Side to the Government on the above issues, and in case if there is no positive approach from the Government, then there will be no alternative than to plunge into Action Programmes.

The chairman, after a patient hearing, responded as follows:-

1. The views expressed by the Staff Side would be conveyed to the Government.

2. As regards Minimum Pay and Fitment Factor, the Staff Side may give additional grounds and justification for any revision, so that the Official Side can consider the same.

3. After receipt of the above note from the Staff Side, the next meeting would be convened. 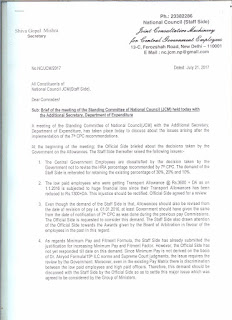 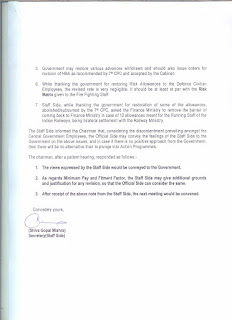