Will the Minister of DEFENCE be pleased to state:

(a) whether the Government has database of families of martyred defence personnel and if so, the details thereof;

(b) the details of compensation, including employment provided to next of kin of those martyred during the last two years and the current year, State / UT and year-wise; and

(c) whether the Government proposes to provide uniform compensation to the families of all martyrs irrespective of branch or battalion of the forces they belong to and if so, the details thereof?

(a) to (c): The number of war widows registered with Zila Sainik Welfare offices (as on 31.12.2016) is at Annexure-I. The information on compensation payable to the Next of Kins (NoKs) of the casualties is placed at Annexure-II. Out of total reserve vacancies for armed forces personnel in PSUs and Banks, 4.5% is specifically reserved for war widows / disabled personnel.

There is no distinction in grant of compensation based on branch or battalion of the deceased defence personnel.
****** 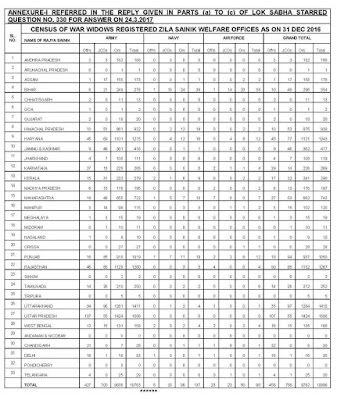 Details of compensation payable to the Next of Kins (NoKs) of the Battle Casualty (Fatal):

(a) Liberalized Family Pension (LFP) as applicable to Battle Casualty which is equal to emoluments last drawn by the deceased individual.

(b) Death-cum-Retirement Gratuity which is based on length of service rendered and emoluments last drawn by the deceased individual.

(c) Ex-gratia lump sum compensation from central Government are as under: 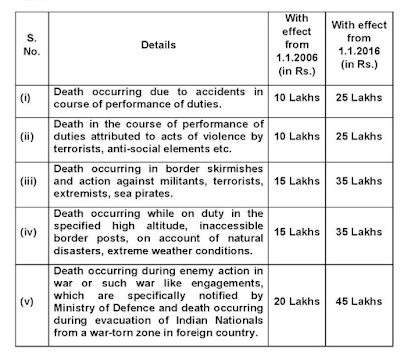 (e) Other assistance provided from insurance/welfare funds maintained by the respective services.
******