Record Note of the Discussion on DOPT- Specific Allowances with Staff Side held on 25.10.2016

No.6/8/2016- CPC
Government of India
Ministry of Personnel, Public Grievances and Pensions
Department of Personnel & Training

Subject: Record Note of the Discussion on DOPT-Specific Allowances, held with Staff Side, National Council (JCM) on 25th October, 2016 under the Chairmanship of Secretary (P)

The undersigned is directed to forward herewith a copy of Record note of the Discussion on DOPT-Specific Allowances with Staff Side held on 25th October, 2016 at 1500 hours in Room No. 119, Conference Room, North Block, New Delhi under the Chairmanship of Secretary (P) for information and necessary action.

RECORD NOTE OF THE DISCUSSION ON DOPT-SPECIFIC ALLOWANCES, HELD WITH THE STAFF-SIDE, NATIONAL COUNCIL (JCM) AT 3.00 P.M. ON 25.10.2016 UNDER THE CHAIRMANSHIP OF SECRETARY (P).

A discussion on the DoPT-specific allowances with the Staff-Side National Council (JCM) was held at 3.00 p.m. on 25.10.2016 under the Chairmanship of Secretary(Personnel) in Room No. 119, North Block, New Delhi in compliance of the direction contained in the minutes of the 2nd meeting of the Committee on Allowances held on 01.09.2016 that every Ministry/Department should firm up its views/comments on allowances relating to the Ministry/Department after holding discussion with their Staff Associations.

On the issue of DOPT's circular on e-receipt, Secretary, DoPT clarified that the circular had been issued before the government accepted the 7th Pay Commission recommendation.

Staff-Side pointed out that despite a Board of Arbitration award in favour of employees that Night Duty Allowance (NDA) should be given in the 5th CPC pay scale from 01.01.1996, the NDA was still being paid at the 4th CPC rate as the Government did not accept the award.

Staff side further stated that this had led to a lot of litigation in the M/o Defence and the matter had gone up to the Supreme Court. Hon'ble Supreme Court had directed that it should be paid on the basis of the actual pay drawn and that NDA should be revised w.e.f. 01.04.2007 at the 6th CPC pay scale which had been implemented by the Government. However, audit authorities came up with an objection that there was a ceiling on it which had been objected to by the Staff-Side.

The Staff-Side informed that the Ministry of Defence had forwarded a proposal recommending that Night Duty Allowance (NDA) may be paid without any eligibility ceiling as per the court judgment to DoPT. It was further said that since the matter is getting delayed, affected employees are contemplating to file a contempt of court proceedings. To avoid such a situation, DoPT may kindly get the necessary clarification issued to Ministry of Defence.

Apart from that, the 7th Central Pay Commission has recommended that it should be worked out with the actual pay of the employee being the criterion. However, in spite of that, except for the Ministries of Defence and Railways, employees working in other Ministries/Departments are getting it at 4th CPC rate. Thus, the absence of uniformity on this allowance across Ministries/Departments is very

glaring which, according to the Staff-Side, is a principal source of litigation and will continue to remain so. Therefore, the Staff-Side suggested that an early revision of the NDA without ceiling, and on the basis of the actual basic pay, and extending it to whoever is asked to do night duty will go a long way in reducing litigations in the future.

Staff-Side pointed out that there are two types of over time duty. One is covered under the Factories Act, 1948, and the other is for the office staff. In the first case, since it is a statutory obligation, the Pay Commission has not recommended anything. But for those Central Government employees who are not covered under the statutory provisions of the Factories Act, OTA is paid at a single rate of Rs.15.85/- only and, that too, for the first hour immediately after the scheduled office closing time, it is Nil. In case of OTA there is also an arbitration award from 01.01.1996 that it should be at par with the 5th CPC pay scale. However, neither it has been implemented nor have the rates been revised.

The Staff-Side stated that if an employee is asked to work after office hours, the rate of OTA should be as per 7th CPC pay scale. Staff-Side were of the opinion that overtime means working after office hours, and asking an employee to work beyond office hours automatically entitles him/her to this allowance. The over time rates should also be above the normal level. It was pointed out by them that as per 7th CPC, an MTS is paid @ Rs.75/hour; whereas overtime allowance is @ Rs. 15.85/- only. Even an outsider employed on casual basis is being paid hourly wages which are more than OTA. The Staff-Side were strongly of the view that if government is deploying a person on overtime work then he has to be paid at least according to the rate of salary which he is getting.

(Action: JS(Estt.)
➢ Cash Handling Allowance (CHA)
Staff-Side informed that the 7th CPC recommendation on its abolition is based on the fact that in most of the offices today salary disbursement is not made in cash. It is credited to the individual bank accounts. But cash transactions did take place in certain offices like the Post Offices where cash handouts are made under the Mahatma Gandhi _ _National Rural Employment Guarantee Act. PLI was also another example. Therefore, if it was stopped all of a sudden, there would be no interest in working as cashiers and for taking the* additional responsibility of handling huge amounts of cash. Therefore, the Staff-Side contended that till all cash transactions are eliminated, CHA should continue.

➢ Uniform related allowances subsumed in a single Dress allowance (including shoes)
Staff-Side informed that the 7th Pay Commission had recommended that Persons Below Officers Rank (PBOR) should be given Dress Allowance @ Rs.10,000/- per month instead of stitched uniforms. There are 5 Ordnance Factories under Ministry of Defence where persons are exclusively deployed to produce special high altitude dresses for the combat forces of the army. 12000 employees are working in these 5 factories. Therefore, if a uniform rate like this is maintained, it will have an adverse impact on the quality of these high altitude uniforms and will thus jeopardise the safety of the armymen and the nation as a whole. Staff-Side is stated to have already made a request to M/o Defence not to implement this recommendation. Army has also taken a stand that this will result in substandard or sub quality material and workmanship. Therefore, this recommendation on the Dress Allowance for PBOR should not be implemented.

As far as Civilian employees are concerned, Staff-Side informed that the 7th CPC had recommended four slabs of Dress Allowances for various categories. One of the categories is called 'Others'. In the Department of Posts there were about 75,000 postmen and Multi Tasking Staff wearing uniform, however, there was no mention about these postmen and multi tasking staff in any of the categories shown by the Pay Commission. If it was presumed that they come under 'Others', then they would be getting Rs. 5,000 whereas at present they were getting around Rs. 7,000 plus washing allowance. As such a separate category should be there for postmen and MTS also and the allowance should be Rs.10,000/-.

Staff-Side pointed out that there were many categories like canteen employees, security staff, chowkidars who had not been mentioned and who were eligible for uniform or uniform allowances. It had to be, therefore, clarified that these categories would be covered under 'Others'. Staff-Side stated that whosoever is getting Dress Allowance as on today should continue to get that. Staff-Side also informed that the recommendations on Dress Allowance had created a lot of discrimination among staff working in similar circumstances.

Staff-Side drew attention to the Dress Allowance with respect to the Nursing Staff. They informed that earlier also Nursing Staff were not given normal washing allowance or dress allowance considering the importance or the peculiar conditions prevailing in hospitals. Now they had also been bracketed in the general category. They were getting Rs.750 as Uniform Allowance and Rs. 450 as Washing Allowance per month. Now there is no separate category that has been given to them. For them a different dispensation should be made taking into account their special requirements because they work in such an environment where their uniforms require regular washing entailing a substantial Page expenditure. As these have not been accounted for in the 7th CPC, the nursing staff should have a special dispensation, as was strongly felt by the Staff-Side.

JS (JCA) requested Staff-Side to submit a note on the justification or break-up of the amount of Rs.32,400(maximum) as suggested by them and the Staff-Side agreed to provide the same.

(Action: JS(JCA)/Staff-Side)
➢ Risk Allowance
The Staff-Side informed that Ministry of Defence is engaged in arms and ammunitions manufacturing etc. In the process of manufacturing them, the staff engaged for this purpose, have to handle hazardous chemicals, acids and so many other poisonous combinations. Cabinet has approved 45 risk operations pertaining to Defence civilian employees. Apart from that, because of the rapid technological developments and increased requirement of the armed forces for modern equipments, ammunitions and explosives, risky operations are there of which Ministry of Defence is aware. In spite of this, the existing Risk Allowance has been abolished by the Pay Commission. It was pointed out by the Staff- Side that it had not been subsumed under the risk and hardship matrix, but rather it came in the abolition list. Staff-Side informed that they have discussed this with Defence Secretary and Defence Ministry is going to recommend in favour of its inclusion in one of the matrix.

In response to the query of Secretary, DOPT as to whether the activities which have been considered to be risky have all been identified, Staff-Side clarified that it has been identified by a High Level Committee and approved by the Cabinet. 45 risk operations have been identified and approved. But within a period of two decades, lot of new ammunitions and new explosives have come in the arsenal, alongwith a lot of hazardous chemicals and acids. So, M/o Defence appointed a Committee and they have identified that all these are additional risk operations over and above the 45 identified, where Defence Civilian employees are actively involved. But the Pay Commission has abolished Risk Allowance. So this has to be incorporated in one of the risk matrix.

(Action: JS,Estt.)
➢ Other Items
Staff-Side has pointed out that in the 7th CPC report it has been stated that any allowance not mentioned and hence not reported to the Commission shall cease to exist immediately. They have requested that this recommendation should be rejected. On the contrary, the administrative Ministries should come forward and recommend for their abolition or retention.

Staff-Side has also stated that 7th CPC had abolished all advances completely. Noting that we regularly celebrate a number of festivals like Diwali, Holi, Eid and keeping the general sentiment in mind, Staff side was of the view that advances were very necessary. Moreover, these advances are required to be paid back to the Government.

On Family Planning Allowance, the Staff-Side stated that since the Government had not changed its Family Planning policy, the allowance should be continued. At least in the case of those people who were getting it should continue to get as they had fulfilled all conditions when the allowance was granted, otherwise there would be a drop in their emoluments. 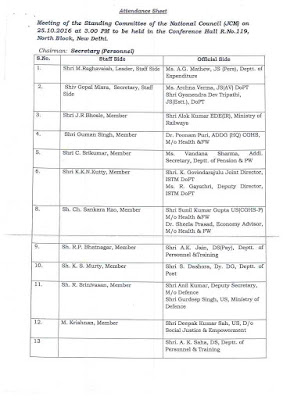