If a portal dedicated to Indian bureaucrats is to be believed, the Narendra Modi government may end up accepting the recommendations of the 7th Central Pay Commission (CPC) on allowances, just as it did on salary component.

The government had referred the proposals on raising allowances to an expert panel headed by finance secretary Ashok Lavasa in June and had given a deadline of four months to finalise a decision.

The 7th CPC had recommended 16 per cent hike in salary payable with retrospective effect from January 1, 2016 and two rates of increase in allowances — 138.71 per cent for house rent allowance and 49.79 per cent for other allowances in its November 2015 report.

The latter portion was referred to the expert panel by the Union Cabinet in June, while taking a decision on the 7th CPC report.

The Sen Times, quoting a finance ministry official, said that the expert committee is likely to retain the hike proposed by the 7th CPC.

"The committee on allowances is likely to stick with the 7th Pay Commission's recommendations on allowances," the official confirmed to The Sen Times.

Central government employees "could get the higher allowances from their October or November salaries," the portal added.

In its report, the pay commission had recommended abolition of 51 allowances and subsuming 37 others after examining 196 Allowances. 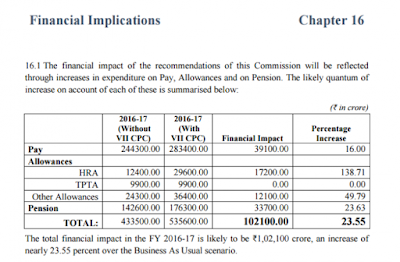 The overall financial impact on account of hike in pensions was estimated at more than Rs 30,000 crore.

"Based on the current trend, the total expenditure on pension during the year 2016-17, without factoring in the recommendations being made by this Commission, is expected to be Rs 1,42,600 crore," the report said.