3. The Recommendations of 7th CPC for upgradation of posts for some categories of Railway employees has been referred to Department of Personnel & Training for taking a comprehensive view in the matter. These categories include Senior Section Officer (Accounts)/Senior Travelling Inspector of Accounts/Senior Inspector of Store Accounts [Para 11.40.83 of 7th CPC report], Chemical & Metallurgical Assistant, Chemical & Metallurgical Superintendent, Assistant Chemist & Metallurgist [Para 11.40.124 of 7th CPC report]. Normal revised pay structure as indicated in Annexure 'A' and also given in Part A of Schedule of RS (RP) Rules, 2016 will apply to these categories till further decision of Government of India.

4. The recommendations of 7th CPC for down-gradation of posts for certain categories of Railway employees have not been accepted by Government of India. In all such cases revised pay structure as indicated in Annexure A and also given in Part 'A' of Schedule of RS (RP) Rules 2016, will apply.

5. The initial fixation of pay in the revised pay structure in respect of existing running staff already in service as on 01.01.2016 will be done in the manner as illustrated in Annexure 'C'. Fixation of pay of those appointed as fresh recruits (running as well as non running) on or after 01.01.2016 will be done as per Rule 8 of RS (RP) Rules 2016.

6. Accordingly, in pursuance of the RS (RP) Rules, 2016, appropriate necessary action to fix the pay of the employees covered thereunder in the revised pay structure needs to be carried out forthwith in accordance with the provisions contained therein. In order to facilitate a smooth and systematic fixation of pay, a Statement of Fixation of Pay will be prepared in triplicate as per the RS (RP) Rules, 2016 and one copy thereof shall be placed in the Service Book of the employee concerned and another copy made available to the concerned associate finance for post check.

8. In terms of RS (RP) Rules 2016 there shall be two dates for grant of annual increment i.e. 1st January and 1St July of every year; of which only one date will be applicable for each employee depending upon his/her date of appointment / promotion / financial upgradation. The increment in pay matrix and date of next increment in the revised pay structure will be governed by Rule 9 & 10 respectively of the RS (RP) Rules, 2016.

9. The decision on the revised rates and the date of effect of all Allowances (other than Dearness Allowance) based on the recommendations of the 7th Central Pay Commission shall be notified subsequently and separately. Until then, all such allowances shall continue to be reckoned and paid at the existing rates under the terms and conditions prevailing in the pre-revised pay structure as if the existing pay structure has not been revised under the RS(RP) Rules, 2016 issued on 28.07.2016.

10. The contributions under the Central Government Employees Group Insurance Scheme (CGEGIS) shall continue to be applicable under the existing rates until further orders.

12. The arrears as accruing on account of revised pay consequent upon fixation of pay under RS (RP) Rules, 2016 with effect from 01.01.2016 shall be paid in one instalment along with the payment of salary for the month of August, 2016, after making necessary adjustment on account of GPF and NPS, as applicable, in view of the revised pay. DDOs/PAOs shall ensure that action is taken simultaneously in regard to Government's contribution towards enhanced subscription.

13. With a view to expediting the authorisation and disbursement of arrears, it has been decided that the an-ear claims may be paid without pre-check of the fixation of pay in the revised scales of pay. However, the facilities to disburse arrears without pre-check of fixation of pay will not be available in respect of those Railway Servants who have relinquished service on account of dismissal, resignation, discharge, retirement etc. after the date of implementation of the Pay Commissions' recommendations but before the preparation and drawl of the arrears claims, as well as in respect of those employees who had expired prior to exercising their option for the drawl of pay in the revised scales.

14. The requirement of pre-check of pay fixation having been dispensed with, it is not unlikely that the arrears due in some cases may be computed incorrectly leading to overpayment that might have to be recovered subsequently. Therefore, the Drawing & Disbursing Officers should make it clear to the employees under their administrative control, while disbursing the arrears; that the payments are being made subject to adjustment from amounts that may be due to them subsequently should any discrepancies be noticed later. For this purpose, an undertaking as prescribed as per a "form of Option" under Rule 6 (2) of the RS (RP) Rules, 2016 shall be obtained in writing from every employee at the time of exercising option under Rule 6(1) thereof. The form of option/undertaking is also enclosed herewith as Annexure

15. In authorising the arrears, Income Tax as due may also be deducted and credited to Government in accordance with the instructions on the subject.

16. On receipt of necessary options, action for drawal and disbursement of arrears should be completed immediately. 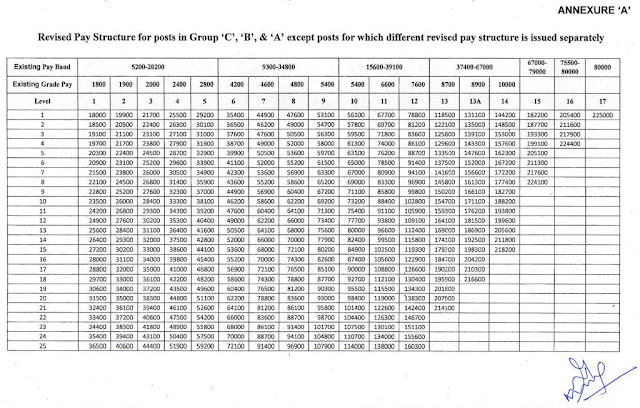 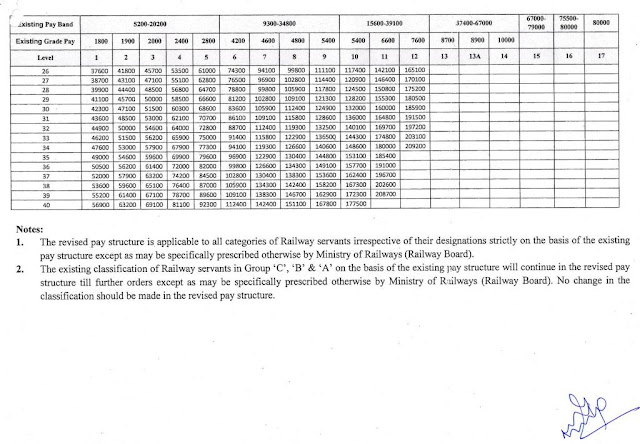 The Level in the revised pay structure mentioned in Column (5) for the posts mentioned in Column (2) of the Tables below have been approved by the Government. The initial fixation as on 01.01.2016 will be done in accordance with Sub rule 2 of Rule 7 of RS (RP) Rules, 2016.

1. Ticket Collector in GP 1900 and Senior Ticket Collector/TTE in GP 2400 should be upgraded to GP-ZOOO & GP-2800 respectively and then fitted in the revised Pay Matrix. This Upgradation is a part of the 7th CPC recommendation accepted by Government of India for the merger of three categories of Commercial Staff i.e. Ticket Checking Staff, Enquiry-cum-Reservation Clerks and Commercial Clerks to a consolidated cadre called Commercial and Ticketing Staff. The rationalisation of functions of the merged Commercial and Ticketing cadre as also the revised AVC, inter se seniority, Recruitment Rules, classification as selection / non selection etc., as approved by Railway Board, will be issued through separate orders.

3. Traffic Assistant, Metro Railway in GP 2000 should be upgraded to GP-2400 and then fitted in the revised Pay Matrix. They shall continue to perform their existing functions unless otherwise specified by Railway Board.

5. Grant of GP 4200 to Perfusionists is subject to acquiring / possession of qualification of Degree in Science + Diploma in Perfusion technology. The eligible Perfusionists in GP -2400 should be upgraded to GP 4200 and thereafter placed in the revised pay structure. Further, the existing incumbents not processing the revised qualification shall be granted replacement pay level corresponding GP 2400. They may be granted the pay level corresponding to upgraded GP 4200 after acquiring the revised qualification OR upon completion of three years in GP 2400/L-4 whichever is earlier.

In the case of Running Staff who are in receipt of Running Allowance, the pay in the revised pay structure shall be fixed in the following manner:

The existing basic pay shall be. multiplied by a factor of 2.57. The figure so arrived at shall be added to an amount equivalent to Dearness Allowance on the pre-revised Pay Element (30% of Basic Pay) admissible as on 1St Day of January, 2016. The figure so arrived at will be located in that Level in the Pay Matrix and if such an identical figure corresponds to any Cell in the applicable Level of the Pay Matrix, the same shall be the pay and if no such Cell is available in the applicable Level, the pay shall be fixed at the immediate next higher Cell in that applicable Level of the Pay Matrix.
Illustration (for Running Staff)

*To be scored out, if not applicable.
UNDERTAKING


I hereby undertake that in the event of my pay having been fixed in a manner contrary to the provisions contained in these Rules, as detected subsequently, any excess payment so made shall be refunded by me to the Government either by adjustment against future payments due to me or otherwise.