The National Joint Council of Action (NJCA) met at the Staff Side office, JCM, New Delhi today at 11.30 AM as scheduled. During the discussions, the Convener received an invitation from the Honourable Home Minister, Shri Rajnath Singh. The following members of the NJCA met the Home Minister in a delegation.

The issues in the charter of demands were discussed with special reference to the 7th CPC related demands. The delegation brought to the notice of the Honourable Home Minister that the NJCA has not received a communication from the Government over the assurances held out on 30th June, 2016, when the NJCA delegation met the Honourable Home Minister, Finance Minister and the Railway Ministers. On 30th June 2016, the Government had assured to refer the revision of Minimum wage and fitment formula to a Committee. The Finance Minister had also clarified that the Government has taken the decision to implement the recommendation of the 7th CPC to bring about parity between the past and present pensioners. They added that such a communication in confirmation of the assurances will enable them to take a decision over the strike action which is to commence from 11th July, 2016. The Honourable Home Minister assured the delegation that the Government will honour the assurances held out to the NJCA leaders on 30th June, 2016 and accordingly the Honourable Finance Minister, Shri Arun Jaitley will issue a Press Statement today, with copy to NJCA.

Accordingly, The NJCA has received the Press communiqué issued by the Honourable finance Minister today. The Committee set up to look into the matter of minimum wage and fitment formula is expected to submit their report to the Government in the given time frame of not more than four months. In view of these developments, the indefinite strike call which is to commence from 11th July, 2016 is deferred till the committee finalises its report.

The NJCA congratulates all affiliates, their units and branches for their strenuous efforts in mobilizing the workers under the banner of NJCA and keeping the unity and strength of the Central Government employees intact. The NJCA takes this opportunity to assure all that it would be its endeavour to ensure that a decent and satisfactory settlement is brought about on all 11 point charter of demands.

The NJCA particularly notes that the Government has set up a separate committee for reviewing the New Pension Scheme, which has been a matter of concern to all employees and workers who are recruited to Government service after 1.1. 2004.

The NJCA expresses its gratitude to all the members of Public, Print and Electronic Media for the support they had extended to the Central Govt employees. 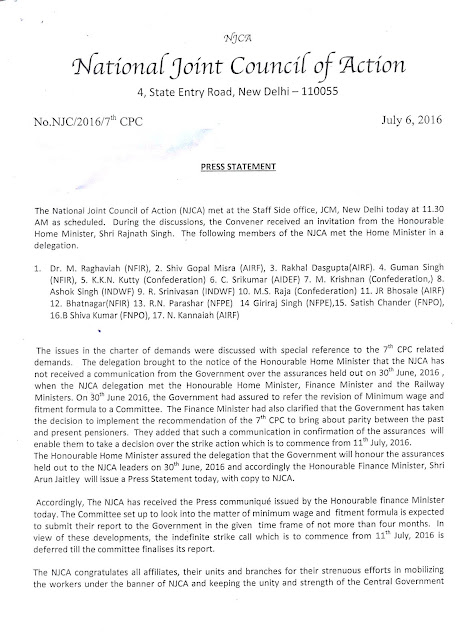 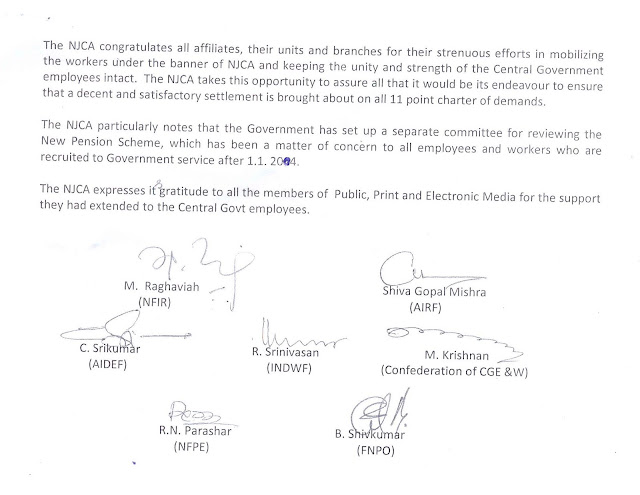