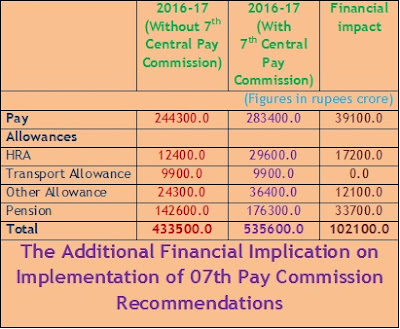 GOVERNMENT OF INDIA
MINISTRY OF FINANCE
RAJYA SABHA
QUESTION NO 241
ANSWERED ON 26.04.2016

(a) whether it is a fact that India needs to grow by an additional 1-1.5 percentage points so that it can sustain the burden of wage increases and pass on more benefits to workers;

(b) if so, the details thereof;

(c) whether it is also a fact that there would be a burden of ` 1.02 lakh crore on account of implementation of the Seventh Pay Commission; and

(d) if so, the details thereof?

MINISTER OF STATE IN THE MINISTRY OF FINANCE
(SHRI JAYANT SINHA)

(a) and (b): The Gross Value Added (GVA) at basic prices is the sum of compensation of employees including social contributions made by the employer (CE), operating Surplus and mixed income of the self-employed (OS/MI), consumption of fixed capital (CFC) and taxes net of subsidies on production. The share of compensation of employees stood at 33.6 per cent in the year 2014-15 (the latest year for which information is available), increasing from 32.9 per cent in 2012-13. Simultaneously, the growth rate of GVA at constant basic prices increased from 5.4 per cent in 2012-13 to 7.1 per cent in 2014-15.

Among the broad sectors, public administration & defence had the highest share of compensation of employees, i.e., 85.0 per cent of the GVA at basic prices, in 2014-15. Higher wages/compensation of employees may have an impact on private final consumption and hence on GDP growth. At the same time, higher wages in public administration & defence may place added demand on the budgetary resources of the Government. On account of this possible two-way relationship, it is difficult to exactly calculate the GDP growth required to sustain the higher wage bill.

(c) and (d): The Seventh Pay Commission, in its Report, has projected an additional financial implication on implementation of its recommendations, of Rs. 1,02,100 crore, which is about 0.7 per cent of the GDP at current market prices of Rs. 1,50,65,010 crore projected in the Budget 2016-17. The details are given below: